Today’s #BEDM blog post is about my Dream Trip. There is only one place that I feel I MUST visit again before I die. This would be Scotland. More specifically Machrihanish where I was lucky enough to live for almost three years. I am a Navy brat. My dad was in the U.S. Navy and communications was his specialty. In the 80s his duty station was at the RAF base near Machrihanish Scotland.

To describe where we lived as magical seems like an understatement. I spent hours upon hours outside exploring. I’m sure we had a t.v. but I don’t really remember it. I remember the dunes, the beach, the thistles, all the outdoors. When we first moved there we rented a home that was on the outskirts of the village. This was the view from my back yard. 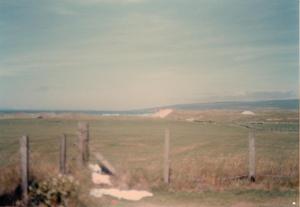 I know it is hard to see but if you look in the second picture there are some bridges waaay back there. They were my access to the beach. You can see them better in this picture below.

These bridges were like magic portals to another land. The dunes that I had access to were, to a 9-10yo, massive and offered hours of exploration and imaginative play. I would often walk into the village to the local shop and buy sweets and shortbread. They had some touristy items there as well and I think I brought home a piece of black beach slate with some Scottish themed drawing on it at least every other week. I remember one had a thistle painted on it. A fruit and veggie truck would come from Campbelltown to the village on Thursday I think. I remember my mom buying leeks and potatoes from the man who drove the truck. She made great soup.  The fish and chip truck would come on Wednesday. We didn’t always get fish and chips but when we did it was heavenly. It was my first experience with food wrapped in newspaper and vinegar on my fries!

Machrihanish is south of a small community called Drumlemble. Since there were no DOD schools(department of defense) in that area my siblings and I went to the local school. Living in Machrihanish meant we attended Drumlemble Primary.

When I attended the four windows across the front were one large room that was divided for use between two teachers. I think they each had two primaries that they taught at a time. My teacher, who was also the headmistress taught in a room at the back. See the window on the side between the doors? We had three primary levels in our room. Around back there was basically just an open field. No play ground equipment that I can remember. It was here that I learned that I suck at taking timed tests. We had timed multiplication tests weekly it seemed. Even though I new my times tables I would freeze when it came to the pressure of answering everything in a 3 minute time span. I remember putting on the play ‘Cinderella”. We had hot lunch daily. It was always delicious. I still love warm custard.  Hot prunes were good too. It was eating those where I learned the rhyme Tinker Tailor . We would count the prune pits. 😉 I made friends that I remembered long into my adult hood and was thrilled to reconnect with two of them via Facebook.

When family came to visit we would go sight seeing. I remember the castle at Inverness, and the beautiful gardens there. I will visit there when I go back.

The countryside was always beautiful and held hidden treasures. 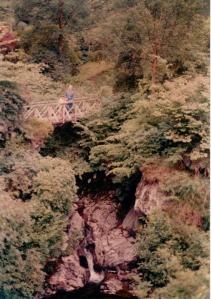 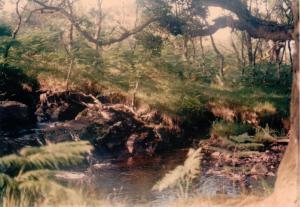 Our closet big hub was Campbelltown. When we first came to Scotland we stayed at hotel there for a few weeks until everything was settled with our home in Machrihanish. When we got settled a trip into town meant we were going to visit the butcher, the baker and the flower shop. Bet you thought it was the candle stick maker. 😉 Not sure they had one in town. The family that owned the local flower shop also had a large B&B in Machrihanish. I remember going there a few times and that the older daughter in the family, Jane, was our babysitter, or child minder. It’s funny because I always thought it was neat that Jane was one of five girls, all having names that started with J. Fast forward and I now have five girls and for my sanity did not name the with all the same first letter. 😉

When I go back I want to revisit all of the places from my childhood. I expect change for sure but I am hoping it hasn’t changed so much that I can’t  recognize it. I also want to drive and explore. Take pictures, go slow, and just soak up all that the Mull of Kintyre has to offer. Something about that place made a huge impression on me. Part of me feels like it is still there, running along the beach, listening to the waves hit the shore, tossing rocks into the sea and collecting mermaid purses. I was lucky to have lived there. Lucky indeed. 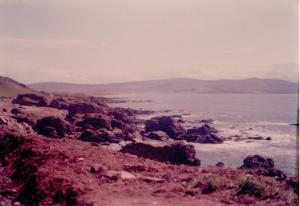 Taking on the adventure of life

The Ministry of Happiness

Have a happy day my friends

Welcome to the story of my life as a newly single mom.

when work, family, and living collide

This could get messy.

A slightly hyperactive view of the world...

a human being unfolding

a blog about a family made by hand

Mt Washington Valley spot to get some Rockin' portrait

my take on books, kids, and the weirdness of life in general

Diving Off The Beaten Path. . .